Gold is the most malleable metal. It is dense, soft and ductile and its properties remain without tarnishing when exposed to air or water.

Due to its unique properties and luster, gold has found applications in fabrication, jewelry, coinage and dentistry.

Jewelry fabrication
increased by 13% in 2017, primarily due to a recovery from India.
Electronics
use of gold increased 5% in 2017, a three year high due to a rise in gold used in bonding wire production.
Official coin fabrication
decreased by 10%, marking the lowest level of fabrication in ten years.
Dentistry
demand for gold was 3% lower in 2017, the lowest in over a decade. Japan remains the largest market in the dentistry industry, accounting for 50% of global demand.
Other industrial & decorative
demand increased 3% in 2017, driven higher predominately by a rise in offtake from Europe and Asian markets.

Total physical demand increased by 10% in 2017, largely due to a return to growth in jewelry fabrication and official sector demand. 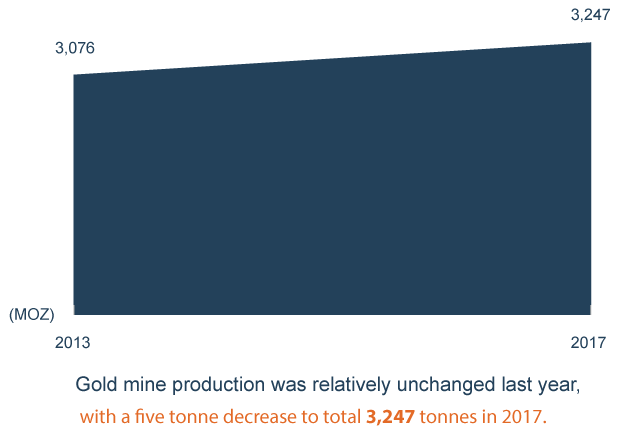 Mine Production by Region (Tonnes)

Global mine production in 2017 was relatively unchanged last year. Russia and Suriname saw the largest production increases led by ramp-ups at the countries’ largest operations, while higher grades and fresh ounces were behind strong gains in Canada.

Physical bar investment - Demand for bullion bars decreased by less than 1% year-on-year to 780 tonnes in 2017.

Exchange Traded Funds - ETF holdings increased by 8% in 2017 to 2,262 tonnes at the end of the year. This performance was the result of strengthened gold prices due to geopolitical tensions over North Korea and the accelerated depreciation of the dollar index.